When talking about security in Active Directory a big challenge is the delegation and how to protect the admin accounts and groups. Microsoft has release two whitepapers about this subject.

The delegation highlights the security model in Active Directory which is important to understand and have in mind to get the best out of it. It’s not an easy task to manage and has many dependencies of administrative users and systems to keep in mind when setting this up.

This goes hand in hand with securing your Active Directory environment since you have very high privileged accounts, and if the wrong persons gets on hold of it, it can do some great damage to the whole company.

Today when the cyber-attacks increases and everything is more connected to the internet and the mix of all types of devices with users on the run it becomes more important to protect your systems. In a Windows network Active Directory has the highest security value since everything is tight integrated and should be your number one identity store giving you access to everything with the right privileges.

Two important points that is highlighted in the Best Practices for Securing Active Directory white paper.

This is a really good practice to minimize the exposure of accounts with high privileges. I liked the idea to delegate a group of users to be given the access to grant a user the membership of e.g. Enterprise Admin, Domain Admin when needed and only for a period of time. When using the principle of least privilege there is no need for users to have 24/7 access to the high privileged accounts and other admin accounts granting you access to sensitive information and resources.

But, the problem with this, for me: The delegated group of users has the same value of protection as the DA, EA groups. It feels like you move the ability to add members to only another group.

With Microsoft Identity Manager (MIM) and Active Directory in vNext, Microsoft has taken this points in action developed an automated way to manage this in a much better way.

Microsoft has released a Customer Technology Preview (CTP) which can be downloaded here.

In Active Directory vNext there is two new features:

When using MIM you can request the group memberships you need to be able to do your work in the scheduled service window, and when the TTL has expired, you are no longer a member of that group.

The request is managed by the Privileged Access Management (PAM) module in MIM, and it requires a shadow forest where the MIM instance, users and groups will exist. The ADDS in the shadow forest will manage the TTL group membership.

I will not describe the installations steps since the CTP has a good step by step guide for installing the MIM PAM functionality. A few things that needs to be in place for this:

The CTP is a Proof of Concept and the final product isn’t yet released. The Foreign Principal Groups as I mentioned, isn’t released. To simulate the JIT functionality and give you a picture of the concept Microsoft has chosen to take advantage of the SIDHistory attribute.

NOTE: The SIDHistory attribute is usually used when migrating to a new Domain or Forest. During the migration, to make it possible for users to keep their access to resources in the source domain the SIDs of the users and groups is also copied to the users and groups accounts in the destination domain. In the Kerberos PAC the SIDs of the new and old domain will be in it which makes it possible for the users to access all resources needed during the migration.

If we fast forward to a succeeded installation of a CORP LAB forest and a PRIV shadow forest with the trust, the MIM PAM is installed like this: 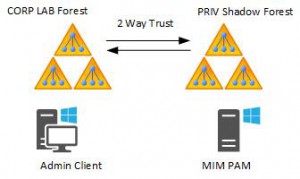 Now the cool part begins. To migrate the administrative groups and users to the shadow forest, logon to the MIM server and start PowerShell.

Start a new PAM session and get the admin credentials in the CORP LAB Domain:

Migrate the ADMINS_FileShare group with SIDHistory:

Create a new PAM role in MIM linked to the newly migrated group with TTL value of 600 seconds and granting the adm_tony account the possibility to be a member:

Open ADUC in the PRIV domain and you will see the migrated user and group with the LAB domain netbios name in the Display Name and account name to clarify this is a shadow object of the LAB domain. 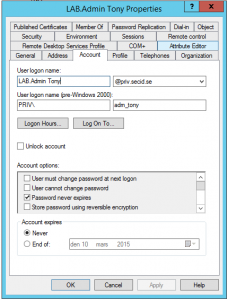 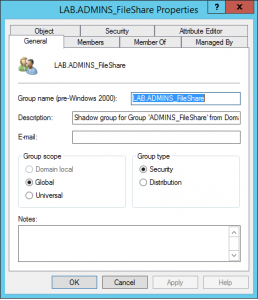 If you look at the group members you can see that it is empty: 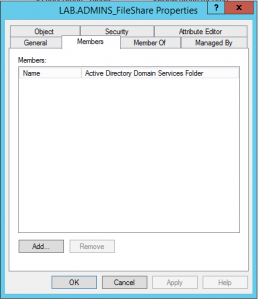 Back in PowerShell the SIDHistory attribute can be verified by following command:

Also, verify that the ADMINS_FileShare group has no members in the CORP LAB Domain.

Logon to a client PC in the LAB domain and open PowerShell.

Notice that the users has no special memberships other than defaults.

This will trigger MIM (if allowed) to add the shadow user in the PRIV domain to the shadow LAB.ADMINS_FileShare group. If we try another group where we didn’t add the adm_tony account the possibility to be member of, it will fail. 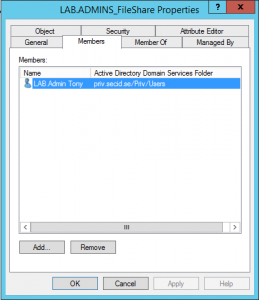 In the PowerShell command prompt logon with the shadow user credentials and open a new PowerShell prompt:

In the new window run the whoami /groups command again and you will see two new group memberships. 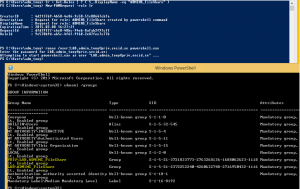 This is really cool!

After 10 minutes ADDS in PRIV domain will remove the group membership and the user will need to do the request again if the sessions has been closed. And notice IF the session been closed. This is an old Kerberos problem, when authenitcated you will get a Kerberos ticket containing all the SIDs of group memberships. And it won’t be updated until TGT renewal.

I think this is a really cool demo and gives you an idea how this will work in the future, since the Foreign Principal Groups isn’t released yet I’m really eager to see how it will work. Hopefully that will be released soon. 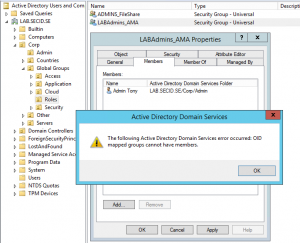